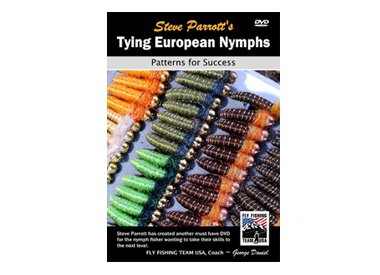 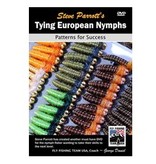 The third installment from Steve Parrott that will have you tying European Style nymphs like a pro!!! Utilizing the patterns, tips and techniques in this 3 hour and 40 minute DVD will bring new life to your existing patterns and hopefully inspire you to create your next ''go-to'' fly.

This DVD is broken down in to four segments, Grub/Czech Patterns, Micro Nymphs, Jigs and Bonus patterns which you can easily navigate to each pattern, play and then return to the menu or category to watch another one.

Reviews:
"Steve Parrot has created another must have DVD for the nymph fisher wanting to take their skills to the next level. In this case, we’re talking about deadly European style nymphs that catch fish in just about every conceivable type of water. Steve covers everything from small jig style nymphs to heavy grub style patterns while using the newest tying materials on the market. If you want to tie cutting edge European style nymphs –buy Tying European Nymphs ...Patterns for Success. Happy tying" - George Daniel

Add your review
0 stars based on 0 reviews
Tweet
Add to wishlist / Add to compare / Print
By using our website, you agree to the use of cookies. These cookies help us understand how customers arrive at and use our site and help us make improvements. Hide this message More on cookies »